What began as a family dream has evolved into a flourishing, successful business and one of the most highly regarded wineries in the Finger lakes.

In the early 1980's, Len and Judy Wiltberger had the opportunity to purchase 30 acres of land overlooking beautiful Keuka Lake.

With their love of wine and winemaking experience, they planted several wine grape varieties at the site with help from their children and Len's sisters. They opened a tasting room in the mid 1980's, adjacent to the vineyards, as an outlet for their premium wines. Keuka Spring's first vintage was in 1985. Throughout the 1980's and 1990's the Wiltberger family produced and sold wine primarily out of this tasting room.

In 2003, the Wiltbergers designed and constructed a new tasting room on the opposite side of the vineyard overlooking the lake, which opened in 2004.

The vines they planted in 1981 continue to bear delicious, mature fruit. They have added plantings of Lemberger, Cabernet Franc, and Gewurztraminer to the original Chardonnay, Seyval Blanc, Riesling, and Vignoles vines.

Throughout the years, the four Wiltberger children have contributed to the development of the business and are still involved today. The family runs the day to day operation of the winery, and often either Len, Judy, or Jeanne is around. Please feel free to say hello when you visit.

Len and Judy are committed to making consistent, high-quality, award-winning wine, hand-crafted from vine to bottle. From the beginning, they believed that Keuka Lake is an area capable of producing world-class wine. They have been residents of the area since 1973.

They also believe that each visitor to the tasting room should have the best wine tasting experience possible, enjoying the fine wine and the company of a well-trained and hospitable staff, surrounded by an atmosphere that compliments learning about and enjoying their wines. With the new tasting room, they are able to share a panoramic view of Keuka Lake from the top of the vineyards. They offer a wide selection of wines, both red and white, dry and sweet, to suit many tastes.

Initially, the Wiltbergers intentionally kept production small, to about 2,000 cases per year, hand-bottled and hand-labeled. As business grew, more and more wine became sold out. To meet customer demand, they have expanded production to about 8500 cases per year.

Keuka Spring's vineyards are in an excellent location for growing and ripening winegrapes. Sloping towards Keuka Lake on the east side of the east branch, with nutrient-rich Honeoye silt loam soil, the vines receive plenty of afternoon sun, an extended ripening season, and are protected from early frosts in the fall and late frosts in the spring by the slope of the hill and its proximity to Keuka Lake.

Since its inception over the years, Keuka Spring Vineyards has received numerous awards for quality, consistent with the Wiltbergers' commitment to producing world-class wines. In 1998, Keuka Spring Cabernet Franc earned the prestigious Governor's Cup, signifying the best single wine in New York State for that year. The Governor's Cup was again awarded to Keuka Spring Vineyards for their 2012 Riesling and yet again for their 2017 Gewurztraminer, making them one of the few wineries ever to have been awarded the Governor's Cup three times in New York State.  In 2016, Keuka Spring Vineyards was named "Winery of the Year" by the New York Wine & Food Classic Wine Competition. Their 2008 Gewurztraminer and 2011 Riesling each took the "Best White Wine" Sweepstakes in the San Francisco Chronicle Wine Competition, a judging of 5000 American wines.

Other accolades include "Best in Class" awards for various wines, double gold and gold medals, and several Rieslings as Governor's Cup finalists. Nearly every Keuka Spring wine entered in competition has won at least one medal per vintage. The winery was declared a "Value Brand of the Year" by Wine & Spirits Magazine, and their wines have earned "Best Buy" and 90+ point ratings in Wine Enthusiast and Wine & Spirits Magazines.

We are confident that you will savor our wines and your wine tasting experience. Please enjoy your web visit. We look forward to meeting you in the tasting room!

Our estate vineyard is located next to the winery, overlooking Keuka Lake.

Learn more about our vineyards 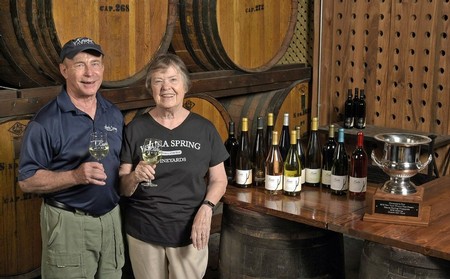 We are delighted to share our wine, stories, and hospitality with you!

Learn more about our team.